Congratulations to Callum Porschke for winning NLTG’s Apprentice of the Year Award for 2019!

After leaving school before sitting his GCSEs, Callum decided to sign up for Military Preparation College in order to change his life. Although this wasn’t his first choice of career, he thought that having no qualifications meant he wouldn’t be able to get a full-time job.

Callum had also registered with NLTG and luckily received an email from NLTG inviting him to attend an interview at Yesss Electrical. Callum attended, hoped for the best and did so well at the interview, he was offered a full-time job. 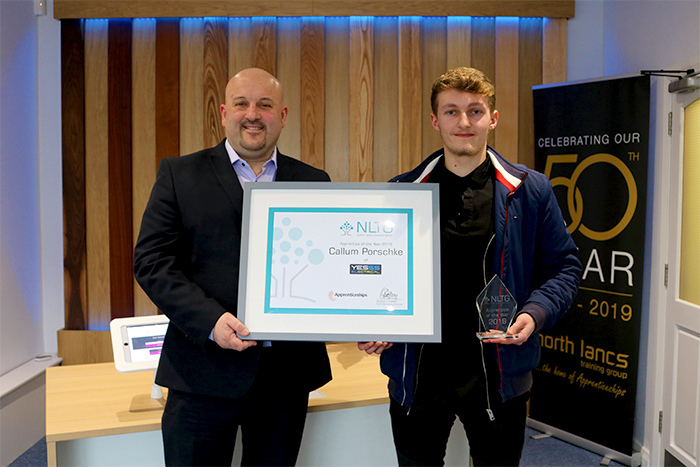 Pictured above is Callum receiving his NLTG Apprentice of the Year certificate, trophy from NLTG Managing Director, Gareth Lindsay.

Callum was given a huge opportunity by Yesss Electrical to undertake a Level 2 Apprenticeship in Warehouse and Storage through NLTG. Unfortunately, at this point things started to change for Callum; he had a few personal issues at home and two months into his Apprenticeship he received the sad news that his Dad had passed away. Callum believes that although this was a very difficult time, it made him stronger and gave him the motivation to work harder and to complete his Apprenticeship.

After a rough start to his Apprenticeship, with help from Yesss Electrical and his NLTG Tutor, Paul Furnival, things started to improve. Through constant hard work and determination, he finished his Level 2 Apprenticeship in August 2018 and progressed onto a Level 3 Logistics Operations Apprenticeship. In December 2019 and after a massive journey, he completed his Level 3 Apprenticeship and was over the moon.

Callum said: “Before North Lancs Training Group, I had no vision of where I was going in life, but now I am confident that I can go on and do huge things. Since starting my journey with NLTG, I have learnt a lot about business, how businesses work and how to make a business progress; which I am putting to use in my own business which I have started since leaving Yesss Electrical. My future goal is to develop my knowledge and my new business ventures, and one day become a motivational speaker. The support from Yesss Electrical and my NLTG Tutors, Paul Furnival and Lee Beveridge, has helped shape who I am today and has changed my life for the better.”

Well done Callum, our NLTG Apprentice of the Year 2019!