Have a question?
Home > NLTG News > 2017 Bay Living Awards – Apprentice of the Year

The winners of the very first Bay Living Awards were revealed at a glittering ceremony at Lancaster University’s Great Hall on Thursday 7th September.

From a surprise appearance by pop star Olly Murs, to drumming rabbits and guests dressed to impress, the first Bay Living Awards was a night to remember as more than 350 people watched the winners take to the stage.

The event was organised in partnership with Bay Living magazine and The Bay Radio as a celebration of everything that is special about the Morecambe Bay region. 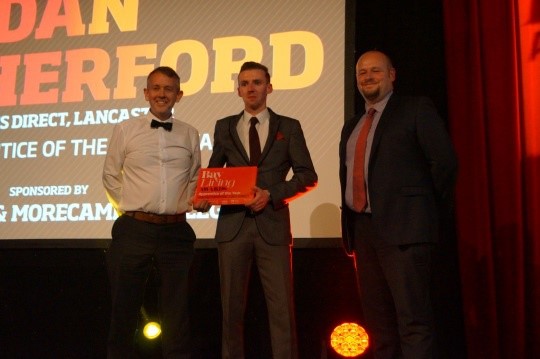 Dan is currently undertaking a Level 2 Apprenticeship in Warehousing and Storage with NLTG, and was nominated for the award by his employer, Logs Direct in Lancaster.  Dan’s tutor, Lee Beveridge, provided a witness testimony for Dan explaining why he felt that he should win the award, including the following statements:

“Dan is always positive in his mannerisms, receptive in relation to new theories and enthusiastic to learn more. At each lesson, he’s always fully prepared and engaged with the lesson.”

“Due to the aptitude and ability shown by Dan, we are covering topics in much more detail, and at a much higher level than the Level 2 qualification dictates.”

“Dan is a pleasure to teach and relishes in gaining new understanding on new topics.”

“As part of the units undertaken, Dan completes hours of independent research and is always keen to find ways to apply this in his current role.”

“Dan has the ability to not only progress to higher levels in terms of his field of study, but in my opinion as his tutor, supervisory and management roles in his career.”

Interviewed after the awards, Dan explained that he was humbled by his Apprentice of the Year prize. He said: “It’s a pleasure to be here, it’s really amazing. It’s a great opportunity to be here. I’ve been there [at Logs Direct] for a year and I think I stand out a little bit because I try to do a little bit extra for everyone.”